1.1 eradicate extreme poverty for all people everywhere
1.4 ensure that all men and women, in particular the poor and the vulnerable, have equal rights to economic resources, as well as access to basic services
1.5 build the resilience of the poor and those in vulnerable situations

Historically these families have made their meagre livelihoods from small animal husbandry, from other micro-enterprises and from serving as occasional farm labourers on nearby plantations. Although they suffered great losses during the 2017 floods, most of them did not qualify for government assistance because most are renters, rather than owners, of their houses and lands.

The project helped these small farmers develop personally and as a community, drawing on their own skills and resources as well as on the expertise of workshop facilitators to organize, share resources, follow environmentally sound practices, promote the participation of women in leadership roles, and negotiate with state bodies. 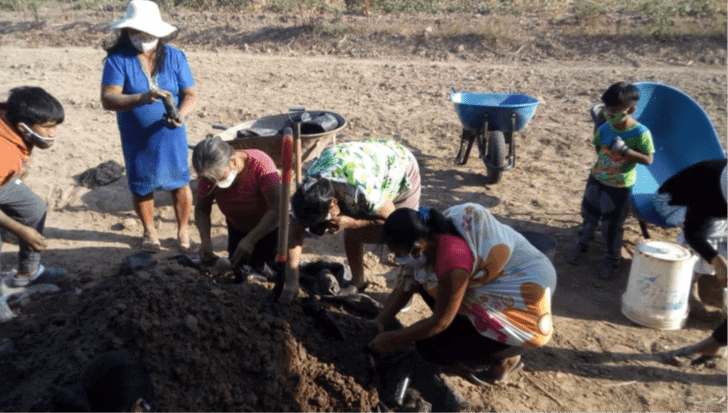 The project also provided funds to rehabilitate the community well (which was buried during the flood), install an electric pump and electricity in the community, and purchase small animals and other supplies. These tools and supplies allowed community members to make environmentally sound use of agricultural waste (as compost and to produce animal feed), strengthen their animal husbandry businesses, ensure a clean water supply, generate income, and improve their living conditions.

During the first wave of COVID-19, they planted basic food crops and shared them with neighbours in need. As lockdown was extended, some project funds were diverted to feeding the families until government supports arrived. The pandemic also forced the community to modify the animal husbandry initiative, opting to breed and raise laying hens instead of guinea pigs.